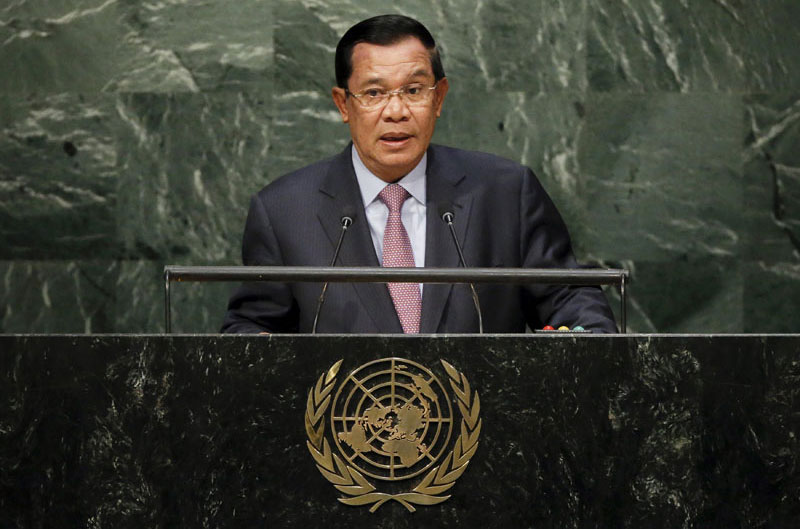 Prime Minister Hun Sen used a speech to the U.N. General Assembly on Saturday to call on developed nations to fulfill their pledges to commit at least 0.7 percent of their annual income to foreign aid.

Speaking at a summit on the U.N.’s development goals, Mr. Hun Sen said it was important that wealthy countries respect their obligations for official development assistance (ODA).

“Forging a consensus on the post-2015 development agenda is a major achievement by our global leaders. However, ensuring the success of this agenda remains as a big challenge for all of us,” Mr. Hun Sen told the Assembly.

Few countries have ever reached either of the goals for aid, which were first agreed to by the General Assembly in 1970. Yet Mr. Hun Sen said Cambodia has made progress with the aid it has received since peace was restored in the 1990s.

“Over the past two decades, Cambodia has made remarkable transformations, especially in securing full peace, strong political stability and improved public security, with high economic growth averaging 7.7 percent per annum,” he said.

“Poverty rates have been dramatically reduced from 53 percent in 2004 to 16 percent in 2013, making Cambodia achieve the Millennium Development Goal target on poverty reduction,” he added.

“The remaining targets are expected to be achieved by the end of 2015. Cambodia is now in transition toward the next stage of development in becoming a lower middle income country by 2016.”

Cambodia is currently on the cusp of the $1,046 per-capita GNI limit that divides the World Bank’s “low income” and “lower middle income” classifications, with the country recording a per-capita income of $1,020 at the end of 2014.

Touch Vibol, president of the Cambodia National Rescue Foundation—a group of Cambodian-American opposition supporters who protested outside the U.N. during Mr. Hun Sen’s visit—said by telephone that he believed the prime minister’s statistics obscured great inequality.

“Of course we can see some high buildings and high bridges, but look at the countryside, where people are fleeing to Thailand and South Korea and Malaysia just to find jobs, even though our people are abused there,” Mr. Vibol said.

“In Cambodia, if you live in Phnom Penh, it can seem like everything is perfect—like a paradise. But in the countryside, people just do not have jobs,” he said.

“It is opposite to what Hun Sen has tried here to persuade the international leaders.”