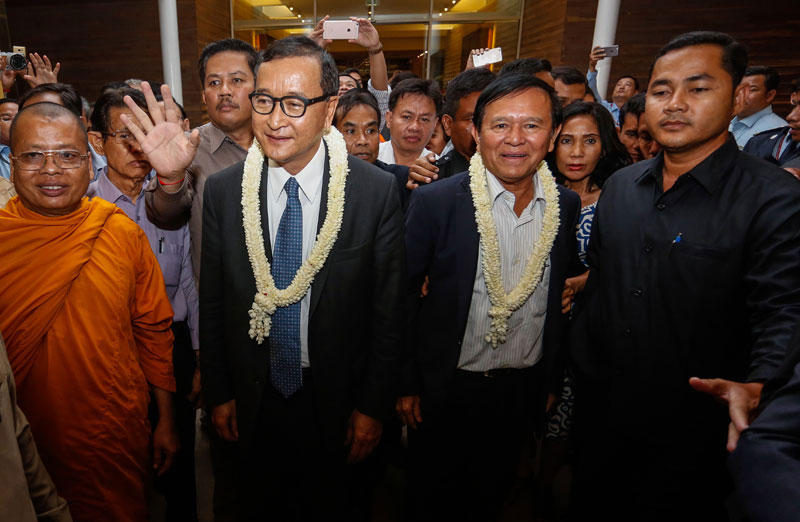 Prime Minister Hun Sen has never had to rely on overwhelming popular support to maintain his grip on power, counting instead on his ruling party’s watertight unity at elections as his political opponents divided into a squabbling and defeated mass.

Winning more than half of the vote for the first and only time in 2008, when the CPP trounced an opposition as divided as ever, Mr. Hun Sen easily offset electoral weaknesses by leading the most disciplined party in the game.

So when two lawmakers from the CNRP, an unprecedented opposition union that has so far been immune to schism, were beaten last month—just days before CNRP Vice President Kem Sokha was ousted as a parliamentary leader—queries about the motive pointed in one direction.

“This move is intended to divide the opposition as well as to demoralize our supporters,” CNRP deputy public affairs director Kem Monovithya, who is also Mr. Sokha’s daughter, said of her father’s ouster and the assaults in an interview with The Diplomat.

“But it is up to us, the opposition, whether or not we allow these tactics to work, and so far we have not allowed it to work. Inside the party, we still have strong unity,” Ms. Monovithya said.

This view was not limited to the CNRP, with The Economist’s Intelligence Unit suggesting the two events were a test of how united the party is behind the passivity that opposition leader Sam Rainsy has insisted it maintain under the “culture of dialogue.”

“It is noteworthy that CNRP President Sam Rainsy, who has tried to keep relations with…Hun Sen cordial, was not the target,” the Unit said in a report late last month. “The targeting of Kem Sokha shows further hints of the CPP’s previously successful strategy of dividing the opposition.”

“CPP efforts to co-opt the seemingly more pliant members of the CNRP, such as Sam Rainsy, could force the more hardline opposition members to break away from the party,” it continued. “Indeed, the reaction of the CNRP’s members to the assault could help the CPP to easily identify its harshest critics.”

Such efforts to agitate skeptics of the “culture of dialogue” within the CNRP and foster misgivings toward figures like Mr. Rainsy are not unexpected, said Kem Ley, a political commentator and founder of the “Khmer for Khmer” grassroots advocacy group.

“It’s not a new strategy of the CPP. The CPP uses a dividing strategy to win elections, and right now it’s hard for the CPP to find its popularity back, and so they return to this strategy,” Mr. Ley said.

“When I go down to the local communities, it is very hard to find CPP supporters now. Even the police, military police, people in the community, they do not support them. So they have only one way.”

Awareness of the CPP’s hopes of dividing the CNRP has dominated Mr. Rainsy and Mr. Sokha’s speeches since the 2013 election, when the united opposition almost doubled its representation in parliament and came within seven seats of victory.

Yet this awareness has been coupled with an equal appreciation for the importance of maintaining political calm until the next election as the CPP, with its control of the police, military and courts, could crush the CNRP if it does not maintain relatively civil relations.

Mr. Rainsy and Mr. Sokha returned to Cambodia together last week after Mr. Sokha’s removal and the assault of the CNRP lawmakers and reaffirmed that they have no option but to continue working placidly with the party’s alleged attackers.

“We come here to reinforce and strengthen the culture of dialogue because we believe there is no choice beside discussing things with each other in the spirit of respect,” Mr. Rainsy told reporters, a week after accusing Mr. Hun Sen of orchestrating the beating of his lawmakers.

It was a message Mr. Rainsy repeated in an interview the next day, while also acknowledging that if his claims that Mr. Hun Sen ordered the assaults was correct, it fundamentally conflicted with the idea that a “culture of dialogue” now exists in Cambodian politics.

“But you cannot question the whole thing because some elements create problems and derail the process,” he said. “What is at stake here is too high to be emotional and drop the culture of dialogue. There is no alternative to replace it.”

As to whether Mr. Hun Sen planned the attacks and Mr. Sokha’s ouster to plant seeds of division within the CNRP, however, the opposition leader was more circumspect.

“It is possible, but I am not going to get stuck on this point,” Mr. Rainsy said. “We have to persevere in the face of some revolting provocation, and we have to remain calm and be consistent with our long-term strategy.”

Yesterday, CPP spokesman Sok Eysan denied that the ruling party, which has rejected claims it orchestrated the beating of the two lawmakers, has ever had a strategy of dividing its opponents, explaining that Mr. Sokha was ousted from his role due to performance.

“Kem Sokha served in his role as National Assembly first vice president wrongly because he worked in the legislative body [but] wanted to incite people to topple the prime minister—that is not right,” he said.

“The CPP always instructs its officials to do good things to win the elections, and it does not win through breaking up any parties,” Mr. Eysan added. “To break or not to break, that is the CNRP’s issue.”

Twenty years after the 1993 U.N.-led election, the CNRP for the first time brought together elements of Cambodia’s opposition like Mr. Rainsy and Mr. Sokha, who over the previous decades had divided into mistrustful factions.

The merger of the Sam Rainsy Party and Mr. Sokha’s Human Rights Party into the CNRP in July 2012 came only a year after a previous attempt to merge was nixed upon the leak of a recording of a phone call between Mr. Hun Sen and Mr. Sokha.

In the recording, Mr. Sokha could be heard replying “Yes,” when Mr. Hun Sen suggested that he attempt to steal officials and supporters from Mr. Rainsy’s party.

Even as far back as the 1998 national election, Mr. Rainsy’s party and Prince Norodom Ranariddh’s Funcinpec would also have comfortably beat the CPP’s vote tally had they run together.

Instead, they split the anti-CPP vote down the middle, allowing Mr. Hun Sen to legitimize the results of the 1997 fighting in Phnom Penh that led to Prince Ranariddh’s ouster, noted David Roberts in his 2001 book “Political Transition in Cambodia.”

“Hun Sen did not have to adopt ‘divide and rule’ tactics; the opposition did that itself,” Mr. Roberts wrote. “Going by election results, had Rainsy and Ranariddh united, they would have achieved a majority of votes and the outcome would have been quite different.”

With the CPP having agreed to hold free elections in 2018—while undertaking reforms and threatening war in the meantime—the CNRP now seems cognizant of the stakes resting on whether it can hold together until the next ballot.

The value placed on unity within the CNRP is indeed so strong it has fostered a belief that all it has to do to win the 2017 commune elections and 2018 national elections is remain intact.

“Everything is centered on the election process,” Mr. Rainsy said Thursday night, before flying out of Cambodia again. “The only hope for Cambodia is to have credible elections.”