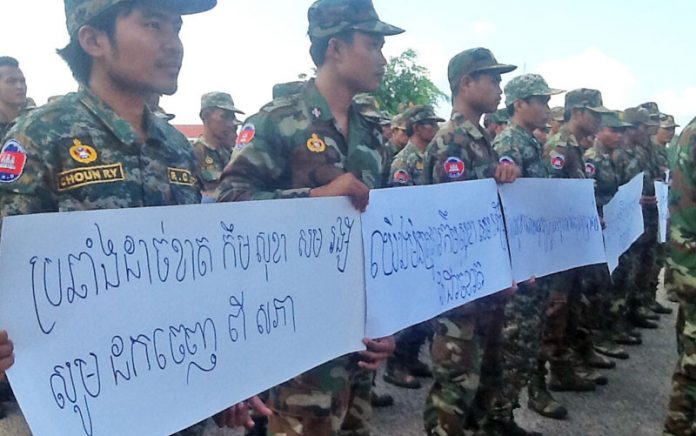 Army Joins Call for Kem Sokha to Step Down

CNRP lawmakers Nhay Chamroeun and Kong Saphea were dragged from their cars while leaving the Assembly and stomped on by men attending a pro-CPP protest demanding that Mr. Sokha, the deputy leader of the opposition, resign his parliamentary position.

The protest was promoted by Prime Minister Hun Sen during a Sunday evening speech, but CPP officials have denied the beatings were sanctioned despite claims that police posted outside the Assembly watched on as they were carried out.

On Tuesday, pro-government media outlets published photographs of soldiers along the Thai-Cambodian border rallying on Monday with signs saying “Kem Sokha is an inciter” and “Kem Sokha is a bad person who creates never-ending problems.”

The photos accompanied a letter from Royal Cambodian Armed Forces (RCAF) deputy commander Kun Kim—a figure close to Mr. Hun Sen since the late 1970s who has advised him officially since 1997—calling for Mr. Sokha to be removed.

“We have all kept an eye on the serious national political situation and have seen the venomous actions of Kem Sokha, the deputy president of the National Assembly, who has made deceitful propaganda [and] incitement…that could result in civil war,” he added.

Gen. Kim concluded that Mr. Sokha must be ousted “for the sake of national security and [so] people can live in prosperity.”

Yim Phanna, deputy commander of RCAF’s Military Region 4, which covers the border provinces of Oddar Meanchey and Preah Vihear, confirmed that soldiers there were rallied as part of a general protest against Mr. Sokha.

“With the recent making of petitions to demand Samdech Heng Samrin remove Kem Sokha for causing trouble…troops were all over the place on the Cambodian- Thai border,” Major General Phanna said.

“They demand his removal because he always wants to make the country have war,” he added.

Koul Panha, director of the Committee for Free and Fair Elections, said Tuesday that such a campaign violated both the Constitution and strict prohibitions on showing partisanship in laws governing the armed forces.

“The military’s role is very important in protecting a democratic process composed of many political parties competing together, so it must be independent and non-partisan, and not show itself requesting on behalf of any political parties,” Mr. Panha said.

“The military has no role blaming members of parliament or the opposition. If [lawmakers] are blocked from expression, we have no liberal democracy,” he added.

Although the CPP has denied organizing the anti-Kem Sokha protest during which the two CNRP lawmakers were beaten, opposition leader Sam Rainsy released a statement late Monday night describing the attack as an example of Mr. Hun Sen’s “fascist methods.”

“This morning’s acts of violence in Phnom Penh are clearly reprisals from the ruling party for the anti-Hun Sen demonstration held [on Sunday] afternoon in Paris, which infuriated Cambodia’s strongman,” Mr. Rainsy wrote in the statement issued from Europe.

“Hun Sen warned his detractors that if Cambodian opposition supporters were to effectively hold their planned demonstrations against him while he is in Paris, then Hun Sen’s supporters would attack and create trouble for Sam Rainsy’s supporters in Cambodia,” the opposition leader wrote. “That was done!”

Mr. Sokha, who is in Thailand visiting the injured lawmakers, himself decried the assaults in a Facebook post, noting that the protesters also pelted stones at his house for six hours in the afternoon as his wife sat inside and police ignored phone calls for help.

“This is a lack of responsibility of the authorities and the government, who have a duty to protect public safety without discrimination,” Mr. Sokha wrote.

“I ask authorities to find the perpetrators and investigate those behind the violence to face punishment…to avoid people losing faith in the justice system and government.”

Monday’s protest was organized by a pro-CPP youth group that earlier this year swore its allegiance to Mr. Hun Sen at an event on Phnom Penh’s riverside. The group has denied responsibility for the violence, claiming that its protest ended an hour before the attacks.

A group of local NGOs, including rights groups Adhoc and Licadho—who routinely send staff to protests, including at the National Assembly on Monday—released a joint statement noting that many of those at the protests were police and officials in plain clothes.

“Observers identified a number of plain-clothed para-police, also known as security guards, and police officers among the crowd, which also included CPP youth members and public officials,” the statement said.

“Over the last few years, we have seen countless peaceful protests violently dispersed in the capital by disproportionate deployment of state security forces—who were nowhere to be seen as two lawmakers were assaulted Tuesday,” the statement continued.

Interior Ministry spokesman Khieu Sopheak said Tuesday that police had not intentionally allowed the two lawmakers to be beaten at the National Assembly’s front gate, saying that the event had caused trouble for authorities.

Gen. Sopheak said that a committee would be formed to investigate the assault on the lawmakers.

“This morning, [Interior Minister Sar Kheng] decided to create a committee to investigate in order to arrest the perpetrators to send them to the court and punish them,” he said.

“The committee will be led by His Excellency General Em Sam An, an Interior Ministry secretary of state, and seven other expert officials,” he added. “All are police, including a deputy municipal police chief, department directors [and] a deputy National Police chief.”

Yet Human Rights Watch (HRW) cast doubt on the chances of the committee finding the assailants, noting that Monday’s beatings of the CNRP lawmakers followed a pattern of CPP reactions to opponents.

“A repeated pattern during deployment of reaction forces has been for some elements to act in a particularly violent manner, while others stop at verbal abuse and threats,” HRW wrote in a statement.

“Another part of the reaction force formula, again documented by the UN and others, is for the CPP to pretend to investigate reaction force violence, but only in order to cover up its own involvement,” it added.

“Using a mob to attack opposition members of parliament sends a chilling signal to Cambodians that a new wave of political violence can be unleashed anytime and anywhere.”