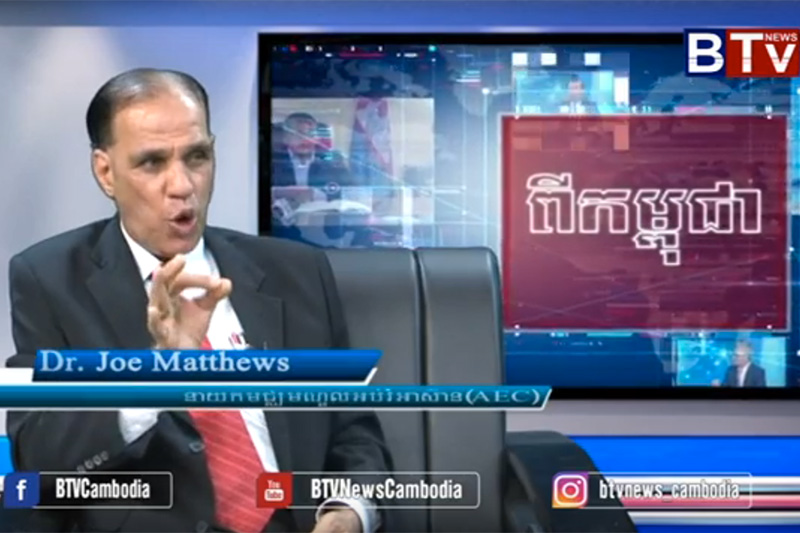 Among Foreign Pundits, a Lonely Fan of CPP

Global Witness wants “to destroy the image of Cambodia, the political system, the economy, the people—I mean the social order of Cambodia,” Mr. Matthews said, echoing the first family’s sentiments.

As a human resource trainer with no academic background in Cambodian history or politics, Mr. Matthews would seem an unlikely choice to assess allegations of corruption, or, in the case of his appearances in Chinese state media, wax prolific on the state of Sino-Cambodian relations.

Mr. Matthews contends that it was up to journalists to decide who to seek out for comment and that 15 years of closely following and assessing Cambodian current events gave credence to his views.

Nonetheless, Mr. Matthews’ pro-CPP zeal makes him an outlier in a group of foreigners—ranging from seasoned academics to the fresh-faced pundits of the English-language press—who typically are among the government’s loudest critics.

In an interview last week, Mr. Matthews said that professional qualifications were no proxy for on-the-ground observation. Just because a “person has a master’s degree in journalism, it doesn’t mean he knows all of the goings on in journalism,” he said.

Mr. Matthews’ title, director of the ASEAN Education Center in Phnom Penh—a role under which he was quoted as early as March—seems to befit a quotable scholar.

But the center is currently little more than a Facebook page run out of Mr. Matthews’ home, trumpeting the accomplishments of a “Living Legend of this Century,” Mr. Hun Sen, and “Patriot and the Man of his Word,” Hun Manet, the prime minister’s oldest son.

The page also dishes out links to interviews the pundit has given, inspirational “quotes” on emotional intelligence and effective leadership, and personality quiz results showing his guardian saint (Mother Teresa) and dominant personality trait (solidarity).

Mr. Matthews says the education center is currently seeking government accreditation and will eventually function as a “silk road, integrating with the different Asean institutions” to train Cambodians in intercultural communication and other in-demand soft skills.

The center will draw on Mr. Matthews’ past experience as head of the department for International Cooperation at Asia Euro University in Phnom Penh, where he conducted similar human resource trainings, as well as his past teaching experience in Malaysia, Hong Kong and elsewhere.

Mr. Matthews, who is married to a Khmer woman and obtained Cambodian citizenship himself just last week, said teaching here has brought him into contact with a “different group of people” through “interactions at the different forum, meeting, workshop, seminar.”

Those encounters, alongside a steady news diet and an ear to the ground, outweigh formal credentials, according to Mr. Matthews, whose LinkedIn profile includes a Ph.D from the University of California, Berkeley.

It’s a strategy that has led Mr. Matthews to support the Cambodian government and its ally China with unbridled enthusiasm.

“They enjoy unshakable friendly relations based on mutual respect and common perceptions on many regional and international issues,” he said.

“I believe Cambodia needs another 10 to 15 years” under the stewardship of Mr. Hun Sen, Mr. Matthews said in an interview last week.

“He is a very strong leader, and very good at making decisions.”

To Sophal Ear, a Cambodian-born associate professor of diplomacy and world affairs at Occidental College in Los Angeles, whose critical take on current affairs has earned the recent wrath of the prime minister and CPP-friendly Fresh News, Mr. Matthews is a propagandist.

“What a mouthpiece for the regime,” he wrote in an email last week, likening Mr. Matthews to U.S.-born, CPP-friendly opinionator Allen Myers. “These people are paid mercenaries.”

Mr. Matthews, as with Mr. Myers, denies receiving any payment for his media appearances or public opinions. But Mr. Ear said that other foreigners, or “barangs” in Khmer, have an obligation to say what Cambodians cannot.

“It’s barangs like you who can write without fear or favor (granted, I wish the average foreign journalist had a longer exposure to Cambodia instead of fly-by-night experience),” he wrote.

“Look, those who do speak truth to power have ended up dead,” Mr. Sophal said, listing commentator Kem Ley, who was murdered in July, environmental activist Chut Wutty, who was fatally shot by military police in 2012, and others.

“Those who can should speak-up, it’s the rent we pay for living on this planet.”

Markus Karbaum, a German political scientist focused on Cambodia, said the quality of one’s insight was dependent on how well one collected and analyzed information.

“As a political scientist, I collect information based on interviews with politicians, governmental advisors, NGO workers, university teachers and students, as well as ordinary citizens throughout the country,” he wrote in an email.

“At the end of the day, cogency of the argumentation and not origin of the author determines the quality of any analysis.”

And on that point, Mr. Matthews agrees. To “become a commentator for any newspaper, you don’t need any professional qualifications,” he said. “You need an intense study, research.”