Prime Minister Hun Sen’s Facebook page has experienced a surge in Facebook “likes” from India, the Philippines and Indonesia that began two days after the murder of political analyst Kem Ley, according to data from social media analytics website Socialbakers.

The data shows that likes from the three countries—all known for hosting so-called “click farms” that allow Facebook users to purchase followers—experienced 9 to 31 percent growth between July 13 and the end of the month, compared to just 3 percent growth in Cambodia during the same period. 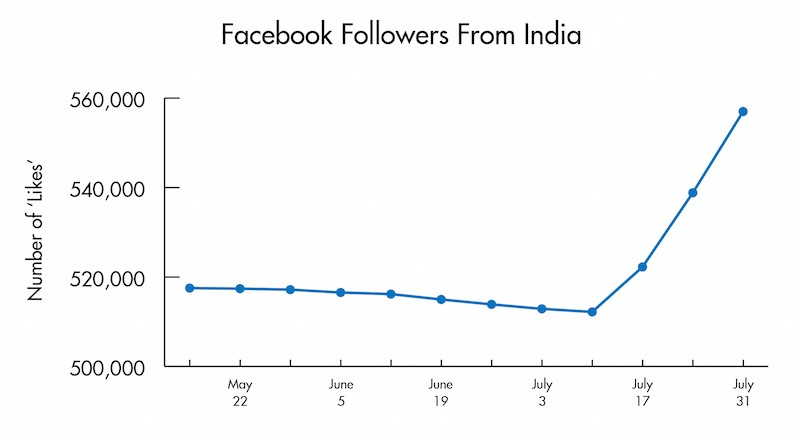 It is not the first time the prime minister’s page, whose popularity has become a point of pride for him, has seen exponential growth in followers from abroad.

In March, the prime minister vehemently denied claims that he purchased likes after data from Socialbakers showed that the number of his followers in India jumped from about 6,000 in February to more than 400,000 by the end of March. The premier also enjoyed a sharp increase in likes from Thailand, the Philippines, Indonesia and Bangladesh during the first few months of the year.

Beginning on July 13, the page once again began accruing thousands of Indian followers every day, soaring to 557,000 as of Sunday—an increase of 9 percent during the three weeks. Likewise, tens of thousands of likes came from the Philippines and Indonesia over the same period, at growth rates of 31 and 23 percent, respectively.

During the same period, the page added more than 75,000 Cambodian followers at a 3 percent growth rate, which roughly matches past growth.

Some 45 percent of Mr. Hun Sen’s roughly 4.9 million followers now reside outside of Cambodia, with India accounting for more than 11 percent of the total as of Monday afternoon.

The boost comes at a sensitive time for the prime minister, who is battling public suspicions over the July 10 murder of Kem Ley, as well as international pressure over Cambodia’s unwillingness to join neighboring states in rebuking China over its sweeping South China Sea claims.

Mr. Hun Sen’s Facebook presence has nonetheless continued to be a bright spot for him.

In a speech on Sunday, the prime minister appeared to taunt opposition leader Sam Rainsy, who held the lead in Facebook followers until early this year and successfully used the platform to rally support during the 2013 election season.

“There are more than 15 million post likes for me. And how much do you actually have?” Mr. Hun Sen said. Mr. Rainsy’s page currently has nearly 2.9 million followers, 82 percent of whom live in Cambodia.

The prime minister again disputed accusations that his likes had been bought.

“Where did I buy them? Where is this place to buy them?” he said.

On websites such as India’s Social King, however, buyers can take up the site’s tagline offer to “Get Attraction, Get Business, Get Fame” by purchasing anywhere from 500 to 1,000,000 Facebook likes from “100% high quality real Facebook users” at rates starting at $11.99.

Soum Soeun, a minister attached to Mr. Hun Sen who is in charge of managing the prime minister’s Facebook presence, said he was in the dark about the surge in new fans.

“It’s a matter concerning technical work related to likes, and I’m not an expert on it,” he said on Monday.

“I just know the total number of likes. When you ask me about the Philippines and Indonesia, I don’t know the sources of the likes.”

Council of Ministers spokesman Phay Siphan said that he, too, could not explain the phenomenon. “Well, you have to check with the Google or Facebook company,” he said.

Mr. Rainsy, however, said the cause of the surge was clear.

“There is obviously no other explanation for the sudden and notable increase than Hun Sen’s Facebook team purchasing ‘likes’ for him,” the opposition leader said in an email, reiterating an accusation that earned him a lawsuit from Mr. Soeun in March.

Mr. Rainsy said the prime minister was running out of possible domestic followers and needed to look abroad to keep up his stratospheric growth.

“It is also a good timing for him to do it now because his popularity is actually sharply declining in relation with recent events and he just wants to show the contrary,” he added.

The page shows a “5.8% increase in Page Likes (subscribers) but immediately loses half of those (they don’t show up in the total as the actual growth is only 2.4%) indicating something odd,” she said in an email.

“It’s the equivalent of 5.8% liking the page then half of them immediately unliking it. No need for them to do that so it’s probably Facebook’s clean up system.”