The Cambodia DailyAll the news without fear or favor
Home Cycle of Rice: Power and Politics

Cycle of Rice: Power and Politics 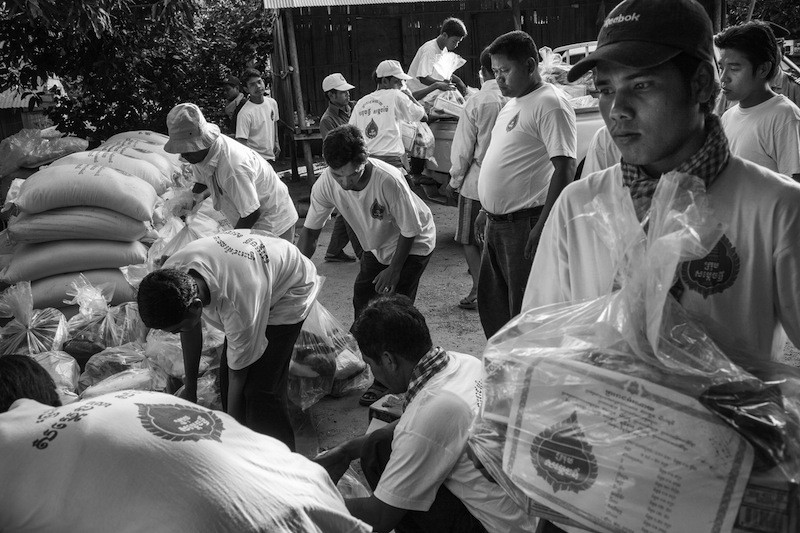 In rural Cambodia, rice handouts buy allegiance. This is the seventh in a 12-part series on Cambodia’s annual rice cycle, to be published monthly.

Speaking to flood¬stricken villagers at a relief event in 2013, Bun Rany—president of the Cambodian Red Cross and the wife of Prime Minister Hun Sen—took the opportunity to remind her audience of where their emergency aid had originated.

“When there are floods or any other incidents, fathers and mothers and brothers and sisters have seen that there is no other party coming to help you here…. There is only the CPP, because all civil servants are CPP,” Ms. Rany said, before distributing rice and other supplies to the villagers in Pailin province.

“She is only involved as a private person in private activities and spends her own money and her own resources, so she can do anything she likes,” Mr. Siphan said at the time.

Despite Mr. Siphan’s protestations, social anthropologist Fabienne Luco said Ms. Rany was one of the leading examples of Cambodia’s long history of patronage and clientelism—much of which has involved giving villagers gifts of rice and other staple goods.

“When high-ranking people provide back rice to people, it’s building up some links of allegiance between them and the people,” Ms. Luco said, noting that in earlier eras, this had meant being willing to fight for your patron, but in the modern context, was more related to votes.

“If you accept my gift, after you can be considered as part of my group. I will protect you and I will provide you with rice or mosquito nets and so on, but you will have to give me back your support during the elections.”

“It’s very feudal like in the Middle Ages, but it [is] still working in Cambodia,” she added.

“Ms. Bun Rany, she is like a figure in religion…the divinity providing good things to the people.”