The Cambodia DailyAll the news without fear or favor
Home The Cycle of Rice: Light Rice

The Cycle of Rice: Light Rice 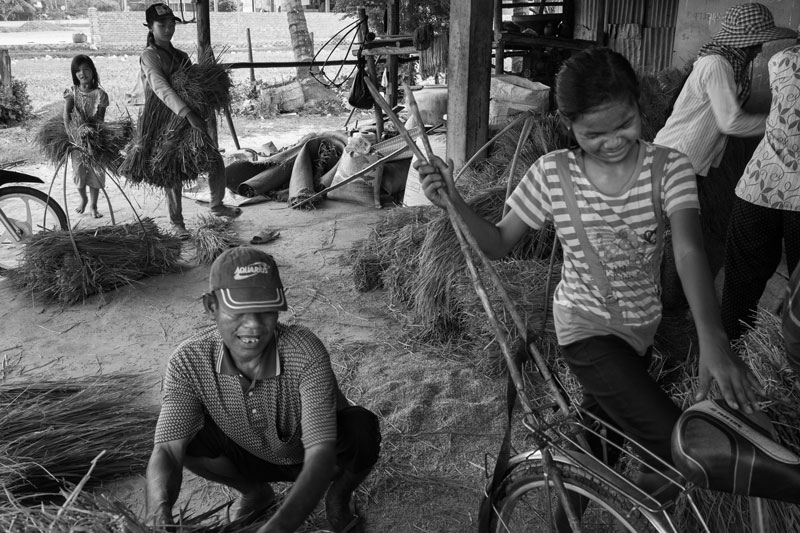 In Kep province, farmers have spent the past several weeks transplanting rice seedlings that will be harvested in about four months. This is the second of a 12-part series on Cambodia’s annual rice cycle, to be published monthly.

While farmers across the country finished transplanting rice seedlings in mid-August—painstakingly uprooting and replanting the seedlings in their paddies—some were also taking to their fields for the “light rice” harvest.

Sitting at her home a few kilometers from the coast in Kep province earlier this month, Yin Ngien, 60, said that her family, with the help of four or five hired hands, had recently finished collecting the light rice, or “srov sral.”

“I only grow the light rice,” Ms. Ngien said, explaining that light-rice varieties only take three months to grow and harvest, compared to six months for “heavy rice.”

And unlike heavy rice, she said, light rice does not require labor-intensive transplanting, meaning that her family would be able to plant and harvest their paddy once more before the end of the rainy season in late November.

“It’s simpler. We only need to plow the field, sow the seeds, let the rice grow, then harvest,” she said, adding that her family had just harvested about 10 50-kg bags of rice.

For many farmers, the light rice harvest acts as a bridge between annual heavy rice harvests, providing rice at a time when resources from the previous year’s December harvest are nearly exhausted and the upcoming one is still months away.

Ms. Ngien explained that for her family, growing light rice was the best way to utilize their two small plots of land, less than 1 hectare in total. “My land is not big enough to do the heavy rice,” she said. “If I grow the heavy rice I would not have enough time.”

Seventeen-year-old Khot Sinuon, who helped with Ms. Ngien’s harvest, said the light rice harvest did not only benefit those growing the crop, explaining that her family used the opportunity to stock up on the rice straw left over after threshing.

“Many people work on the rice harvest for money,” Mr. Sinuon said. “But my family and I want the rice straw to feed our cows at home.”

With four cows to feed, Ms. Sinoun said, she and her parents were kept busy moving from paddy to paddy, helping with the harvest in exchange for straw.

“Sometimes we know the farmers have the plan to harvest, but often we just go around the area checking if anybody needs help,” she said. “This year we have helped at four or five different places.”