The Cambodia DailyAll the news without fear or favor
Home The Cycle of Rice: Transplanting

The Cycle of Rice: Transplanting 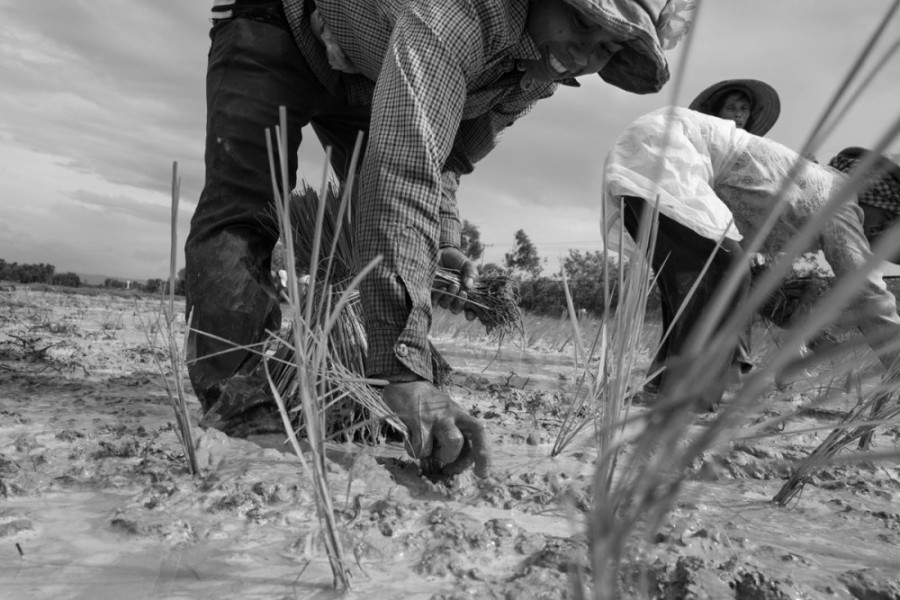 In Kep province, farmers have spent the past several weeks transplanting rice seedlings that will be harvested in about four months. Thus begins the first of a 12-part series on Cambodia’s annual rice cycle, to be published monthly.

Hunched over a water spigot, cleaning the muddy soil from his legs, Heang Heab explained that as a farmer, his relationship with rice was both simple and vital.

“Rice farming is very important for the life of the villager; no rice means no life,” the 34-year-old father of three said.

Along with about 30 other farmers, Mr. Heab had just left a neighbor’s rice paddy, where he spent the cool early hours of the morning transplanting young rice seedling, or “samnap,” about a month and a half after it was first planted.

“Transplanting is the most difficult part of rice planting,” he said.

“We have to withdraw the samnap neatly, store it, and take it back to transplant in the field only a few days later,” he added, noting that conditions in the paddy often made the tedious process more challenging.

“Soil and mud in some fields can be tight and sticky,” the farmer said. “Some samnap with its roots adheres so strongly to the mud. We have to be careful when pulling it out” to avoid damaging the roots.

According to the International Rice Research Institute, rice transplanting is the most-widely used method of crop establishment in Asia. By pulling out and replacing the seedlings 15 to 40 days after they were initially planted, farmers “ensure a uniform plant stand and give the rice crop a head start over emerging weeds.”

This year in Kep, transplanting was delayed due to a lack of rainfall.

As Mr. Heab explained, the manual transplanting technique practiced throughout Cambodia is a particularly painstaking process.

Farmers remove the seedlings from the fields by hand, bundle the stalks together to be stored for a few days, and then replant the crop in a different rice paddy in tight, uniformed patterns.

If the rice seedlings are not replanted quickly enough, the crop could be destroyed.

To ensure that transplanting is done in a timely manner, villagers in Damnak Chang’aur district engage in “tver sre braw-vas dai” or “the sharing of hands.” If a farmer helps a neighbor with the transplant, the neighbor will return the favor.

She said that transplanting was a family affair–her daughters, aged 8 and 13, were accompanying her in the field for the first time this year.

Walking back to the paddy to put in another hours-worth of work before the midday heat started beating down on the field, Mr. Heab said that after about a month of transplanting, the process was close to being completed.

“We will probably finish transplanting in this village in the next few days, and for me, I still have to lend my hands in the next four or five days because I already borrowed hands,” he said.

Ma Pharng, 80, who owns the paddy where Mr. Heab and the other villagers were laboring, observed that little had changed in the more than 70 years she had spent farming rice.

“It’s not that difficult after I have done it over and over, year after year,” Ms. Pharng said, as she methodically pulled bunches of rice seedlings out of the ground then slapped it against her leg to knock the excess soil from the roots.

“Nothing is different from the time I learned to farm from my parents when I was young,” Ms. Pharng said. “We have always transplanted our samnap like this.”