The Cambodia DailyAll the news without fear or favor
Home The Cycle of Rice: Trial & Error

The Cycle of Rice: Trial & Error 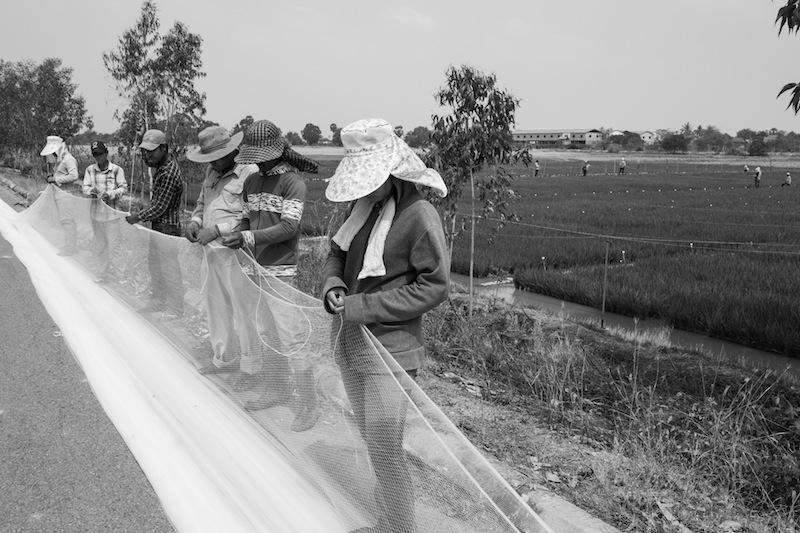 In testing fields on the outskirts of Phnom Penh, researchers are trying to cultivate rice that can handle the heat. This is the eighth in a 12-part series on Cambodia’s rice cycle, to be published monthly.

When Prak Sarith thinks back to what farming in this coastal district was like 20 years ago, he simply shakes his head, remembering the difficulties of trying to produce an annual rice harvest in an area regularly flooded with seawater.

For Nou Koum, the dry season brings a multitude of complications to his rice farm in Prey Veng province.
He struggles for months to keep his paddy safe from the bugs and birds that come to prey on his fields when water levels fall. “More importantly, during the dry season, we don’t have enough water to do farming,” said Mr. Koum, 52. “We can use water from a well instead, but this is still not enough.”

The bugs and birds can be kept away with nets, but the scorching heat has been getting worse with every year, he said.
“I have noticed that the temperature has been rising, more and more, from one year to another. For example, last year, it was about 37, but this year it has been 40 or 41,” he said.

These are among the challenges that Kynet Kong, deputy head of the plant breeding division at the Cambodian Agricultural Research and Development Institute (Cardi), is attempting to address through his research.

“Now, we don’t have the [breeding] line for rice that is strongly resistant to heat, but we are in the process of making that variety,” Mr. Kong said in an interview last month.

The Cardi team is currently attempting to identify and isolate a heat-resistant gene in rice, at which point they can move toward the end goal: a dry-season rice variety that uses less water and can withstand high temperatures.

“If it contains the gene that controls the heat tolerance in rice, but the yield is still low, it can be the source of breeding material,” he said.

“We can introduce that gene into other varieties that have good yields but are sensitive to heat.”

This trial-and-error process is a lengthy one, and developing a variety of rice that hits all the marks could take more than a decade, according to Cardi’s director, Ouk Makara.

On a sweltering day at Cardi in Phnom Penh last month, Mr. Makara gestured toward a shock of green shoots—a splash of color in the otherwise beige fields at the institute’s Dangkao district facilities.

Cardi, which receives funding from the government but is independently run, has developed 42 types of rice since it was founded in 1989, from strongly aromatic varieties to those that mature quickly.

Since 2008, the institute has been focusing on addressing the problem of increasingly long and hot dry seasons.

“Based on climate change predictions, dry season will be extended [and] water scarcity is increasing,” he said.

“Usually, you can irrigate 120 hectares of rice in dry season, but when you have water scarcity, less rain, something like that, you can produce only the water to supply 80 hectares.”

“If you have another variety—a new variety—maybe that can grow in 100 hectares with the same amount of water that supplied the previous variety with 80 hectares.”

The optimum temperature for growing rice, Mr. Makara said, is about 30 degrees Celsius during the flowering phase, which occurs just before the crop ripens.

But in Cambodia, temperatures can easily creep over 40 C during the dry season, causing the rice to become “super stressed” and leading to smaller yields and an inferior product, he added.

Over the next five years, just one or two of the hundreds of breeding lines being tested at Cardi will end up alongside the successful varieties proudly displayed there.

From there, they will be sold and given away to farmers through the Agriculture Ministry and NGOs, as well as directly.
It could be another five years before the heat-resistant variety that researchers are pursuing makes it into the hands of farmers, Mr. Makara said.

For now, farmers like Mr. Koum in Prey Veng province will have to make do with the smaller yields the dry season provides and hope that technology will eventually catch up to nature’s demands.