The Cambodia DailyAll the news without fear or favor
Home The Cycle of Rice: Full Circle

The Cycle of Rice: Full Circle 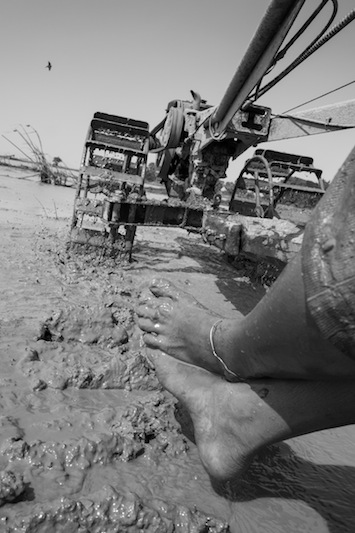 After a devestating dry spell, rice farmers in Kep province sow their fields and brace for the year ahead. This is the last in a 12-part series on Cambodia’s rice cycle.

In any other year, Uk Kheng would have sown her rice field in May. But this is not like any other year: The drought has taken a toll.
“I did not throw seeds to the field a few months ago because there was no water, and I was worried the seeds would be destroyed,” the 58-year-old farmer said.

It was not until late last month, after the rains finally came, that she planted. Now she will watch and worry. She will wait and hope that her 1 hectare field produces enough rice to feed her family.

In a country where rice equals life—but where drought exacerbated by deforestation is an increasing menace—there are no guarantees of a successful crop.
“I can’t expect it,” she said. “I’ll have to see the result in December.”

Cambodia’s rice farmers are skilled at adapting to the elements, but the specter of continuing drought has many farmers fearful about the year to come.
“We are worried about this year, because last year was a threatening situation for us,” said Sreng Chan, 33, whose farm is about a kilometer from Ms. Kheng’s field.

When this year’s drought finally broke, Prime Minister Hun Sen congratulated the government on its handling of what he described as Cambodia’s worst natural disaster in a century, and said officials were well-prepared to address prolonged dry spells in the future.

“I admire all government forces’ participation in rescuing our people who were affected by water shortages,” he said in late May.

But farmers remain skeptical. Prum Kun Ny, a member of the O’Krasar commune council in Kep, said help had been hard to find over the past year.

Holding a sickle and standing beside her two young grandsons, the 68-year-old laughed when asked about the assistance her village received. There was not enough water to drink, she said, let alone to irrigate rice fields.

“At that time, I was rushing to find water for villagers. We tried to ask NGOs for money to transport the water,” she said, adding “Some government officials don’t understand” the problems facing farmers.

Theng Savoeun, secretary-general of the Coalition of Cambodian Farmers Community, said the drought’s consequences would be felt by farmers for a long time to come, in their larders and their wallets.

Farmers typically take out loans to buy fertilizer, tools and seeds, under the assumption that they can repay their obligations—and feed their families­—with the rice they grow. In drought years, this becomes impossible.

To avoid defaulting on their loans, or buying repayment time with higher interest rates, Mr. Savoeun said, farmers have to sell so much rice that “nothing remains for them to eat.”

“There are some farmers who force themselves to migrate to other countries, or to the city, to earn money to pay back the bank,” he said.
This migration—the loss of the farmers and the hands they borrow to sow their fields, transplant their seedlings and harvest their paddy—has the potential to further disrupt Cambodia’s cycle of rice.