The Cambodia DailyAll the news without fear or favor
HomeCambodium
Cambodium

Daily observations from Cambodia and beyond.

Thai authorities are holding a soccer player from Australia 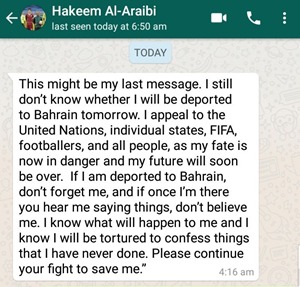 Thai authorities detained Hakeem Al-Araibi on November 27 at the request of his homeland, Bahrain. “Amnesty International says Al-Araibi was tortured after a 2012 arrest. In 2014, he was convicted in absentia by a Bahraini court for vandalizing a police station amid protests inspired by the Arab Spring. He denied the charge and fled to Australia,” reports NHK.

“After the brutal murder of Jamal Khashoggi, the world should not underestimate how far the Gulf States will go to repress dissent,” said Sayed Ahmed Alwadaei, Director of Advocacy at the Bahrain Institute for Rights and Democracy.

Activists have protested in front of the Thai consulate in Melbourne for Al-Araibi’s release.

FIFA says it wants Al-Araibi, who has refugee status in Australia, to return to the country “at the earliest possible moment,” rather than be extradited from Thailand to Bahrain.

Huawei’s CFO Meng Wanzhou has been detained in Canada at the request of the United States. The move coincides with Japan’s decision to ban Huawei and ZTE from government contracts amid fears of cyber attacks.

And Japan is not alone. British carrier BT Group PLC has started removing Huawei equipment from its network joining Australia and New Zealand.

He Jiankui, the Chinese scientist and biogenetic entrepreneur who edited twin girls’ genes, has been missing for over a week. Some suspect he has been arrested.

Dr He’s claims of gene editing have been denounced by many, including the larger science community, the Chinese government, and even his own university.

China’s Vice-Minister of Science and Technology Xu Nanping quickly shut down Dr He’s lab, ordering a full investigation and flagging some form of punishment for the researchers.

In May this year, Dr He told Chinese state-owned media outlet China Youth Daily he had taken “two years’ unpaid leave” from the university to concentrate on his own enterprises, though the school has said it actually granted him three years of leave.

Hong Kong media reported that the university president, Chen Shiyi, personally flew to Hong Kong to collect and escort Dr He back to Shenzhen, where he was put “under house arrest”.

16 days of Days of Activism Against Gender Based Violence

As part of LICADHO’s contribution to the 16 days of Days of Activism Against Gender Based Violence, the the human rights group offers another portrait highlighting women land campaigners and human rights defenders who face state violence in Cambodia.

Sor Sorn (58) has faced repeated harassment, arrests and detentions for protesting against the violent forced eviction of Borei Keila community in Phnom Penh. She has also been arrested on multiple occasions during peaceful protests supporting jailed human rights defenders, notably during the Black Monday campaign in 2016 and 2017 and while protesting for the release of fellow activist Tep Vanny.

Being a Journalist in Cambodia (Part 2)

In part two, the pair discuss the financial, professional and emotional tolls their detention continues to have.