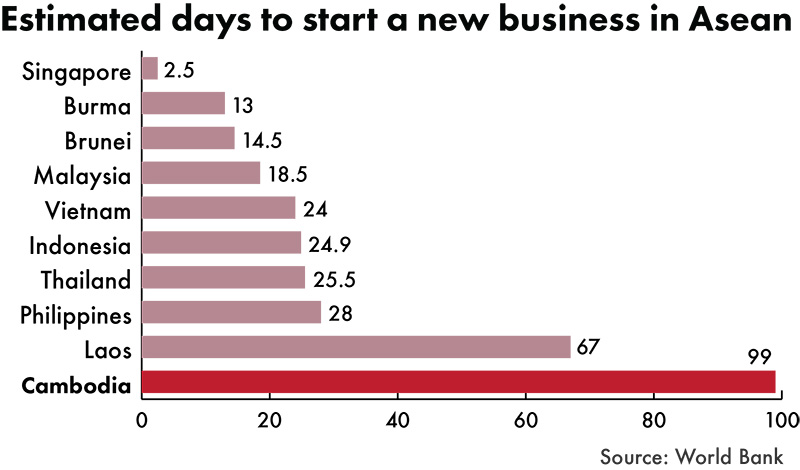 Despite a much-hyped online business registration system rolled out this year, starting a company in Cambodia has only become harder, a World Bank report released on Wednesday says.

Then-Commerce Minister Sun Chanthol talked up the new online system, predicting last October that it would lead to a dramatic improvement for Cambodia in the World Bank’s annual rankings of economies based on the ease of doing business. 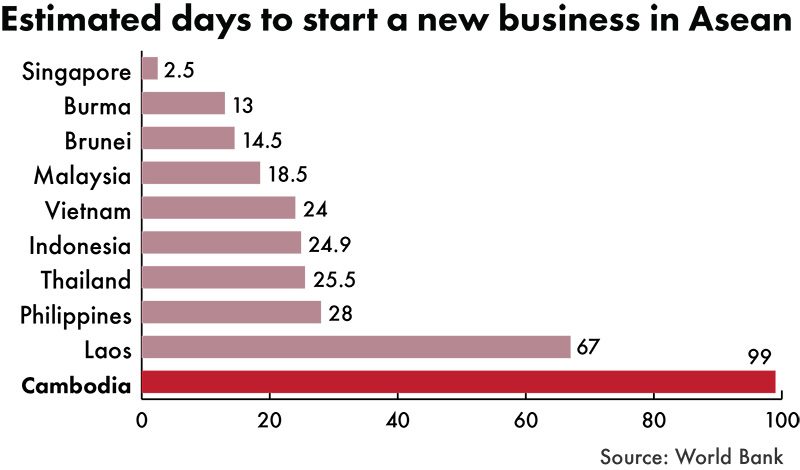 Speaking at a parliamentary session, Mr. Chanthol said the new system would catapult Cambodia’s rank in the subcategory of starting a new business from 180th to 21st, “assuming that other countries stay the same.”

In the latest report, however, Cambodia remains ranked 180th, with a dip in its score, from 58.1 to 54.93 out of 100. Only 10 countries fared worse. Access to and ease of obtaining credit was one of the high points in the report.

“Cambodia made starting a business more difficult by increasing the time required to register and by requiring companies to submit evidence of capital deposit after registration,” the report says.

In a presentation of the report, Joanna Nasr, a private sector development specialist for the World Bank, said the new online system was part of the problem.

The number of steps required to start a business increased from seven to nine under the new system, and the time to complete the process grew from 87 days to 99, the report says. That is significantly longer than for other Asean countries, which range from 2.5 days in Singapore to 67 days in Laos.

“People need time to get familiar with the system and for the system to run smoothly,” Ms. Sophari said. “I expect next year, maybe late next year, everything is going to be better.”

If the process still failed to improve the ease of business registration, more resources would be necessary to strengthen the technology, she said.

Deadlines for reregistering businesses under the new system have been repeatedly pushed back this year, with fewer than half of the country’s 42,000 companies having switched over at the beginning of this month.

“Even though it’s not really a satisfactory result, it’s an improvement,” Ms. Sophari said. “I’m optimistic about [future] results that the World Bank releases, and we’re committed to doing better, especially in business registration.”

Overall, Cambodia dropped three places in the World Bank ranking from 128 to 131 out of the 190 economies surveyed, despite a slight uptick in its combined score.

Improvements cited in the report include the credit bureau starting to provide credit scores to banks and financial institutions and better access to credit information.

The process of getting credit in Cambodia is now considered to be the 7th easiest in the world according to an assessment of financial legislation and services provided by credit bureaus. 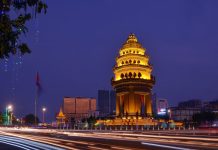