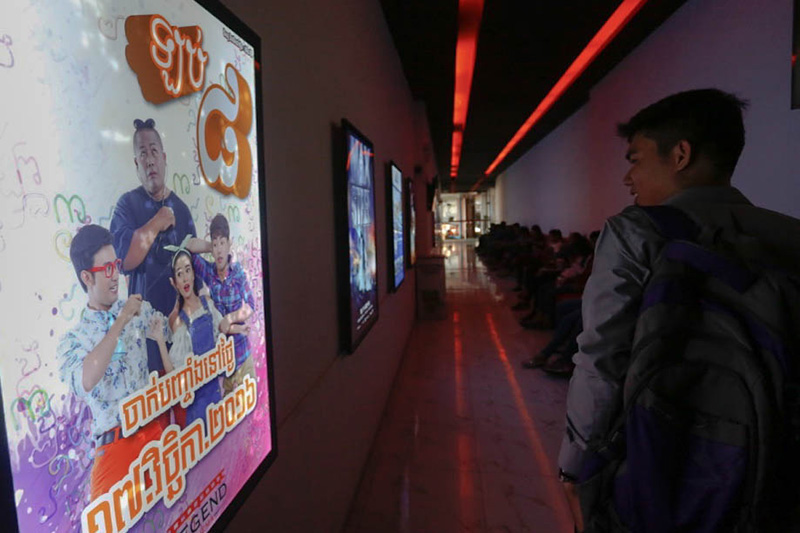 Chhek Chanma Vita and her sister Vity were meeting two friends to watch the Khmer horror-romance “Bon Ding Srey Tang 5” (“The Lawsuit of the Five Wo­m­en”) on Wednesday afternoon, but it was mostly a matinee selection of last resort.

“Because there is no other choice,” Ms. Vita said, sitting in the lobby at the Legend Cinema at Phnom Penh’s City Mall.

She had already seen the U.S. movies on offer—“Doctor Strange,” “Trolls” and “Max Steel”—as part of her regular movie diet, which includes a weekly trip to the cinema.

The sisters’ love of viewing mov­ies on the big screen, and their options at commercial theaters—mostly U.S. films with a light mix of Cambodian and other Asian offerings—reflect the growing Cambodian film industry’s dual commercial markets, and its challenges ahead.

While Cambodia has a population of 15 million, the movie-going public is much smaller. Film distributors and directors say they must weigh for which audience—foreign or domestic—they are making their movies, and whether they can risk releasing films internationally. Cambodian commercial films have yet to prove they can attract foreign audiences.

With only 6,000 movie seats in the country, nearly all in Phnom Penh, filmmakers and distributors have two options to obtain a return on their investments: producing movies on small budgets for the smaller local market, or targeting the larger international market by upping production values and budgets, said Cedric Eloy, an international adviser to the Cambodia Film Commission, a private organization aimed at developing Cambodia’s film industry.

“So far, very few make money out of their project,” Mr. Eloy said in an email. “Some recoup their investment.”

Westec’s core business is distributing international, mostly English-language films with Khmer subtitles, to the nation’s commercial theaters, of which there are five in Phnom Penh and one in Siem Reap. However, Westec partnered with Cambodia’s other film distributor, Sabay MVP, in February to create PuPrum Entertainment, with the goal of developing and distributing Cambodian films nationally, and eventually overseas.

“Horror-comedies or, precisely put, comedies, are the best-selling in Cambodia. The (Cambodian mass) audience goes to cinema for one simple purpose: FUN,” PuPrum’s general manager Sum Sithen wrote in an email.

“The taste locally doesn’t match up with the taste in other markets,” said Mr. Chai of Westec. “I don’t want to push out content that is not going to reflect well, because [if] we do that, and we fail, we make it harder for the next generation of Cambodians who want to release their content.”

But Mr. Sithen of PuPrum said the film, the only one it has distributed outside Cambodia, wasn’t a financial success. “It didn’t do commercially well as it was just our kick-start,” Mr. Sithen said.

At a panel discussion on the local film industry last week, Sok Visal, who directed “Poppy” with an estimated budget of $100,000, said filmmakers had to sacrifice profits in order to make quality feature films.

“You can’t survive making feature films,” he told the audience. “How can we make profits out of cinema right now? It is not possible unless we make really commercial films, where everybody knows the story, in order to survive.”

The kind of commercial films that make money, he said, keep production costs very low, include a lot of silly jokes and toe the line of comedy conventions preferred by Cambodian movie audiences.

Another director, Italian filmmaker Jimmy Henderson, who has worked in Cambodia since 2011, echoed Mr. Visal’s views on market pressures.

“Cambodian films have im­proved technically, but they are still far behind in regards to content, if you compare them with neighboring countries. Meaning that what is produced here, can’t really be ex­ported overseas. So most of the time, profit out of a film is marginal or non-existent,” Mr. Henderson said in an email.

“Movies that are produced in Cambodia for overseas markets are not digested well by the audience, so investors are reluctant to invest in different content,” he added.

Mr. Henderson’s latest movie, the action-thriller “Jailbreak,” is set to be released in early January. He said the film’s genre provided “more chances to hit overseas mar­kets,” but he first wants the film to be successful locally.

“We’ll have to make two different cuts of the film, one for overseas and one for the local market in order to fulfill its maximum po­tential,” he said.

Mr. Chai said Westec planned to distribute “Jailbreak” locally first, and then possibly “take it on the smaller, limited screening circuit [internationally] to pockets of Cambodian populations, but not as a mainstream screening.”

But for Mr. Eloy, the com­plications of competing with foreign films, and of filmmakers struggling to choose a target au­dience, are ultimately trumped by creating exceptional content.

“Good film will be successful and make money in the end,” he said.