Growing steadily at a rate of 5 to 7 percent a year, the number of domestic tourists has nearly doubled over the past 10 years, new statistics from the Tourism Ministry show.

Home-grown tourists are estimated to reach about 10 million this year, boosted by travelers making multiple trips, according to preliminary data collected by the ministry’s statistics department. That is an increase of about 7 percent compared to last year.

Siem Reap—which draws millions of visitors annually to cultural landmarks such as Angkor Wat, Tonle Sap lake and the Cambodian Cultural Village theme park—was one of the top three destinations for locals, along with Phnom Penh, which hosted the Water Festival last month, and Sihanoukville, the site of last week’s Sea Festival, said Kong Sopheareak, the department’s director. The ministry counted about 5.8 million local tourists in 2007.

Kim Sereiroth, director of the tourism department, said increasing development and diversification of tourist attractions, as well as better infrastructure and accessibility to sites, had contributed to a boom in local visitors.

“In the past, there were fewer local tourists traveling. But with more nature parks and other tourist sites developed, people like to travel outside of their own provinces more and more,” he said, adding that Phnom Penh residents made up a majority of the burgeoning local market.

“Stable economic growth leads to better incomes. Therefore, they want to explore more of their own country,” she said.

She also said that most residents like to travel independently, but domestic package tours were popular for company trips or for garment workers who wanted to travel in groups without having to arrange their own accommodation.

The number of international visitor numbers continues to grow, but the annual increases have gotten smaller. The increase in 2012, for example, was 24 percent less than the increase the previous year. For the 12 months through October, about 4.9 million foreign tourists visited the country, a growth of just under 6 percent compared to the same period a year earlier. 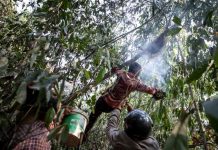